Posted by Matt Seber on Wednesday, June 4, 2014
Advertisements
We've heard of several Galaxy S5 owners reporting about the missing Download Booster feature on the phone, especially those from AT&T, Sprint and Verizon. 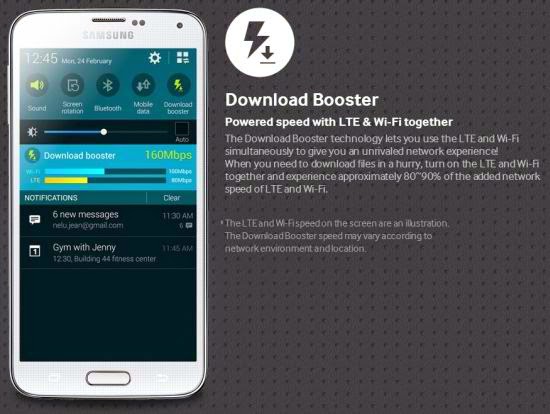 The main reason for this is because these three network carriers have decided to get rid of the Download Booster feature from the device. Samsung however did not deliberately eradicate this feature because of it is the one that makes the phone unique.

Considering the main reason, you can deal with this issue by doing any of these workarounds:

1. Switch to other carriers that are not restricting the feature like T-Mobile or U.S. Cellular (if you are under Sprint, AT&T or Verizon Wireless).

2. Other than switching of carriers, you may also keep an eye on XDA developer's upcoming rooting tools that would restore Download Booster feature on the S5 handset.

Download Booster feature on the S5 allows users to combine Wi-Fi and LTE connections during download of files larger than 30MB. Given the notion that file download is done with two connection interface, users can see a vastly improved download speed that what would be obtainable by each one individually.

In case your network carrier does not restrict the feature, you may drop a visit on the nearest Samsung service center in your area and have your phone checked for any potential damages that might have caused the problem.