Posted by Matt Seber on Thursday, August 14, 2014
Advertisements
One thing you need in order to play videos stored on your Samsung Galaxy S5 is to sign in to your Samsung account beforehand. This is a must-do especially when playing videos synced from your other devices.

Following are the steps to play a video on your GS 5 handset:

1. Touch Apps from the Home screen.
2. Touch Video to continue.
3. Scroll through the video files available or stored on your phone. Wait until each video thumbnail starts playing a preview of the video clip.
4. Now touch a video to start playing or viewing it.

You may also use Pop-up Play when playing videos on your Galaxy S5. This is one way to multitask and transform your video player into a pop-up window floating on the screen. The pop-window is resizable and movable to anywhere on the screen while the video is playing.

Follow these steps to use Pop-up Play to view and play videos on your Galaxy S5:

1. Touch Apps from the Home screen.
2. Select Video.
3. Touch a video file to view or play.
4. Tap to icon represented by a boxed slanting arrow-pointing-top-right. Doing so will let you continue playing the video in a floating window.
5. Use your two fingers to pinch or spread to resize the floating window.

You can also drag the window to any location you want it to be placed on the screen.

While the office specs of Samsung Galaxy S5 do support the audio format WAV file, many people are having troubles playing WAV files on their phones. In fact, there have been several S5 users saying they cannot play WAV files attached in the email voicemail on their device.

What should be done to play WAV files on the Galaxy S5?

In order to play WAV files on your Galaxy tablet or phone, you need to install an application, called WavPlayer from Google Play Store. It's a highly recommended app for playing voice mail attachment, including .wav files.

Follow these steps to play WAV files on your Samsung Galaxy S5 with WavPlayer: 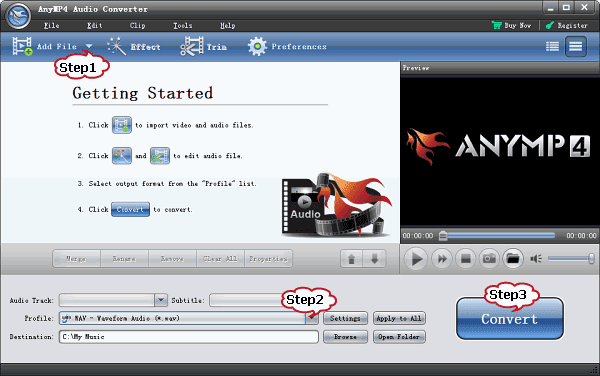 WavPlayer is a WAV player and audio player app designed for VoIP or Voice over IP voicemail files sent as email attachments from Magic Jack, Asterisk, Vonage and more. It is capable of playing many types of audio file formats from email attachments that are not supported by Android phones. You can install WAV player from Google Play for $0.99, and use the app's full version.

2. Convert WAV to MP3 to play the file on your Galaxy S5 or other Galaxy devices.

You will need to use Free download WAV to Galaxy Converter available for Mac and Windows OS. Just installl and launch the program to use it.

The WAV to Samsung Galaxy Converter is mainly used for converting any audio formats you'd like to a Samsung Galaxy S supported file such as MP3, FLAC or WAV formats. It will also let you add popular video files to convert video to an audio file you want and extract the audio file from any of your favorite videos.

The output or converted file will be an easy-to-play WAV on your Samsung Galaxy S5.