Posted by Matt Seber on Thursday, August 14, 2014
Advertisements
Ready for yet another fully-packed Galaxy device? Well, the wait won't be long as Samsung has already made an official announcement of its latest Galaxy flagship called the Galaxy Alpha. And it's gonna be something different. 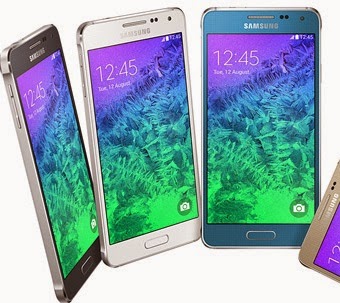 After the successful roll-out of the Galaxy S5, Samsung reveals its newest entrant device to its flagship smartphones. The new device is called Samsung Galaxy Alpha, purportedly an LTE-A version of the Galaxy S5.


As shown in some prior image leaks, the Galaxy Alpha appeared to be a metal-framed smartphone, with curved corners that make the device look more sophisticated.

In its official announcement, Samsung describes the Galaxy Alpha as a new device that represents a new design approach by the firm, in a sense that this new handset will be marketed as having a premium feel, instead of the criticized plastic feel on the existing Galaxy S lineup.

In short, the Galaxy Alpha is a premium device that is crafted with a metal frame exposed on the sides and a faux leather back that is similar to the S5. It is expected to be smaller and thinner compared to its flagship model.

The new Galaxy Alpha has a Super AMOLED 4.7-inch screen (slightly smaller than the GS 5), with 720p resolution, thickness measuring 6.7mm and weight of 115grams.

As for the operating system, the Galaxy Alpha will run on Android 4.4.4 Kitkat, with TouchWiz. It will also sport S Health and Ultra-low power mode, fingerprint reader, as well as heart rate sensor that is compatible with the Samsung Gear smartwatches.

Among the major features that will be integrated into the new Samsung Galaxy Alpha are LTE Cat. 6 connectivity, dual-band Wi-Fi, and Bluetooth 4.0. As for the battery, the new Galaxy smartphone will be powered by a relatively small 1,860mAh battery.

Starting September, the phone will be launched in  150 countries, including Russia on the 12th of September.