Posted by Matt Seber on Wednesday, October 8, 2014
Advertisements
Apple's Siri has once again occupied the latest tech headlines, following a study that claims Siri is the most distracting hands-free system for drivers. 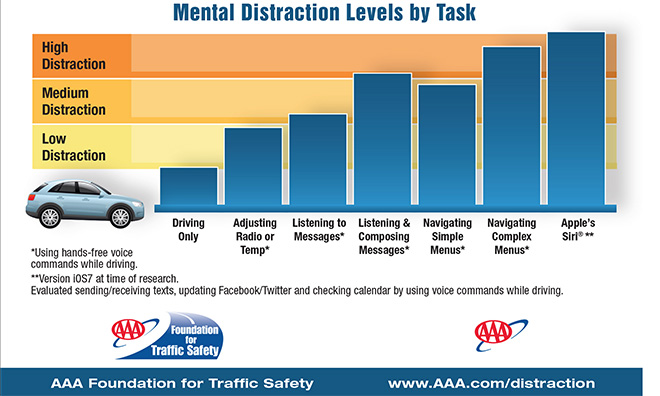 A new study on voice-control systems in cars, conducted last year by the AAA Foundation for Traffic Safety named Siri among its roundup or list of imperfect hands-free systems that could cause potentially-unsafe driver distractions.

Here's a statement from AAA's chief executive on their research findings:

“We already know that drivers can miss stop signs, pedestrians and other cars while using voice technologies because their minds are not fully focused on the road ahead,” said Bob Darbelnet, chief executive officer of AAA.

“We now understand that current shortcomings in these products, intended as safety features, may unintentionally cause greater levels of cognitive distraction," the CEO added.

Based on a separate assessment on Apple's Siri version iOS7, researchers have utilized the same metrics to measure a broader range of tasks like the use of social media, sending texts and updating calendars. It was then found that the use of hands-free and eyes-free feature of Siri generated a "relatively high category 4 level of mental distraction."

“Technologies used in the car that rely on voice communications may have unintended consequences that adversely affect road safety,” explicated Peter Kissinger, President and CEO of the AAA Foundation for Traffic Safety. “The level of distraction and the impact on safety can vary tremendously based on the task or the system the driver is using.”

A full report on AAA's research on "Measuring Cognitive Distraction in the Vehicle II: Assessing In-Vehicle Voice-based Interactive Technologies" is available at NewsRoom.AAA.com.