Posted by Matt Seber on Tuesday, June 14, 2016
Advertisements
Performance degradation is inevitable to any mobile devices even the highest-tiered variants like the Samsung Galaxy S6 Plus. Among the common indications is when the device does not function in such a way it should. For example, when it suddenly powers off while being used or not turning on at all. Things like this would likely occur in time. However, if you think this shouldn't be happening to your Galaxy S6 Plus just yet, then you might as well consider looking into some things first. 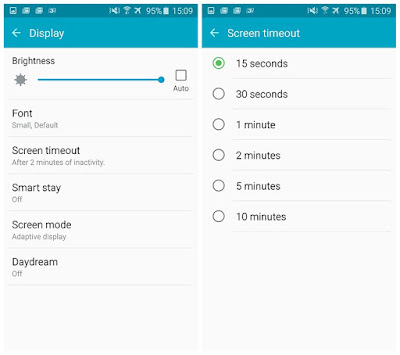 In this content, you will learn two of the first things you should do when all of a sudden your Samsung Galaxy S6 Plus smartphone powers off while you're using it.

First workaround: Check the battery an ensure it has enough charge to power up your device.

Second workaround: Verify and configure the screen timeout, if necessary.

Your device is designed with a power save feature that turns off the display after a predetermined amount of time.

You can change the amount of time screen timeout duration accordingly with the following steps:

1. Tap Apps from the Home screen.

3. Navigate to and tap to select Display.

4. From the Display settings menu, scroll to and tap on Screen timeout, indicating how long for the display to turn off when idle or inactive.

5. Tap to select a screen timeout duration. This option will define the duration you prefer for the screen to remain on.

Note: The longer the duration the more battery life will be used.

This problem can also be triggered by a corrupted program or application on your device. As a matter of fact, a number of cases or instances when the phone suddenly dies occurred while in the midst of using certain apps like playing games, streaming videos or other media files.

In this case, you can boot your phone into safe mode to isolate whether or not the problem is due to a third-party app you're using. If the problem stops while in safe mode, then you can either disable or uninstall the faulty application.