Posted by Matt Seber on Friday, August 8, 2014
Advertisements
One of the most recent issues encountered by Android phone users, including Galaxy S3, is on group messaging. It lies when the GS 3 user cannot receive group messages from iPhone users. Many then are asking, is it a glitch on Samsung or Apple? We'll, we really can't tell who's system glitch this is, but we sure can do something about it.

Please read on to find out what to do when the same thing happens on you. While we cannot guarantee your problem will be totally fixed after reading this content, we hope that somehow we've given you some sort of enlightenment on the available options you can try and work on to deal with it. 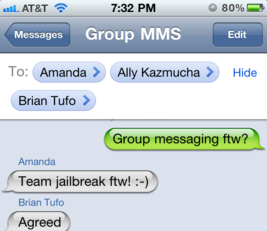 The issue is raised by several GS 3 owners through forum threads/postings, along with the recommendations, workarounds and solutions offered as replies from helpful members and forum visitors/posters.

"My friend started a group chat with her iPhone and I received the first message from her. However, when I responded, my reply only went to her, instead of going to the group. I received replies from other members in the group though only to that first message and that they came in as MMS, individually. I have downloaded many apps in an attempt to fix the problem, including Handcent and GoSMS. But it doesn't seem to work. I have no idea what's going on. Need help please."

What should be done?

Group messaging issue is a common problem among Android phone users who want to join in a group chat with iPhone users. It's likely because the stock ICS messaging app on the Galaxy S3 does not support iMessaging or due to the so-called iMessage bug. Apple has already acknowledged the issue but not sure if they're going to fix it until the next update to iOS 7.

Third-party apps like GoSMS or Handcent are among the suggested options for Galaxy S3 users to receive group messages from iPhone users. So you may try any of these said apps and see if any of then will solve the problem. Otherwise, we recommend you to contact your phone carrier immediately and notify them with your problem. According to a thread reply, this issue has something to do with the carrier settings.

Also, there have been some reports that some phone carriers are currently working with Apple to get this issue resolved as soon as possible.