Posted by Matt Seber on Saturday, October 18, 2014
Advertisements
While the Galaxy Note 3 is tagged among the most powerful phablet available in today's mobile market, it still has no excuse from having some technical glitches. 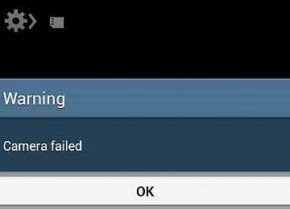 One of the common issues encountered by a number of Galaxy Note 3 users is an error when using the Camera application. Typically, an error "Warning: Camera Failed!"prompts when the device has insufficient memory and battery power available is not enough to run the camera app.

This error could either be a hardware fault, wherein according to others, a result of lose wiring in the camera circuit. But before we jump into that conclusion and take the unit to a service center, there are some workarounds/potential solutions you can try on.

Here are three suggested methods/workarounds you can use, if you are prompted with an error message while attempting to launch or open the Galaxy Note 3 camera app. Be sure to take note of the error message so you will have a hint on which resolution method to apply or use.


Lots of Samsung Galaxy device issues can be remedied with a simple reboot. So it wouldn't hurt if you give it a try this time.

To restart/reboot your Note 3, just remove the battery and leave it out for 30 seconds. After the elapsed time, re-insert the battery, then turn your phone on.

Alternately, press and hold the Power button for one to two seconds, and then tap on Restart.

Second method: Free up some memory


If the error has something to do with insufficient or low memory space, then free up some memory on your device by transferring media files (photos and videos) to a computer or to a cloud storage service.

An optional microSD card can also be used to increase your phone's camera storage capacity.


If the error is associated with low battery power, connect your device to a charger and let it charge completely. Alternately, you can replace the battery with a fully charged one (if available).

After digging through a number of relevant forum posts/threads, we've come up with the following user-defined fixes for camera app failure on the Galaxy Note 3 device, as follow:


If problem continues after performing the aforesaid methods, then please contact your phone carrier and escalate the issue for further troubleshooting and official recommendations.